7/16/2020 Endicott College professors Katie Clarke and Becca Kenneally have been selected as finalists in the Stage Directors in Theater/Musical Theater and Conductors in Musical Theater divisions (respectively) of The American Prize national non-profit competitions in the performing arts. They were chosen based on their collaboration in directing and conducting Shrek! The Musical at Endicott

Endicott College professors Katie Clarke and Becca Kenneally have been selected as finalists in the Stage Directors in Theater/Musical Theater and Conductors in Musical Theater divisions (respectively) of The American Prize national non-profit competitions in the performing arts. They were chosen based on their collaboration in directing and conducting Shrek! The Musical at Endicott in April 2019.

The American Prize is a series of non-profit, national competitions designed to recognize and reward the very best in the performing arts in the United States—in schools and churches, and at community and professional levels. It was founded in 2009 and is awarded annually. Judged solely through recorded performances, competitors complete the application and submit links, CD, DVD, or VHS video of performances. Clarke and Kenneally submitted their videos to the contest in June of 2019.

Shrek! The Musical at Endicott was one of the largest endeavors produced at the school in recent years, and was the first collaboration of the Clarke/Kenneally team. As co-directors, Clarke was responsible for stage direction, Kenneally for music. For the submission, Kenneally was required to submit a video of herself conducting the 15-person pit orchestra. This is the first time the Performing Arts department has submitted an entry for The American Prize.

“Katie stepped into the directing role this year and it turns out we make a great team,” said Kenneally, who is Chair of the Performing Arts Department and a 10-year veteran of music direction at the College. Clarke had been an Endicott student, starring in Kenneally’s productions, before she went on to get her master’s degree in Theatre Education from Emerson College. 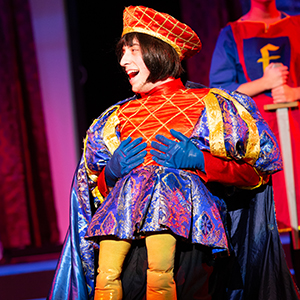 Lord Farquad played by Stephen Hoadley in Shrek!
The Musical at Endicott College in April 2019.

“Endicott has always been my favorite place to create,” said Clarke, “because our school is all about experiential learning, I was excited to have the opportunity to come back and collaborate with one of my greatest mentors, Becca.”

“When music and stage direction are in sync, magic can happen on stage!” Kenneally said.

“I love feeling like I can go to my team about anything. That openness really made our message of being true to yourself shine through. I think that’s when you know you’ve hit the creative jackpot. We can question, challenge, discover, and produce a better product for it,” Clarke said.

Maestro David Katz is the chief judge of The American Prize. Professional conductor, award-winning composer, playwright, actor, and arts advocate, Katz was the founder and, for twelve years, chief judge of the Friedrich Schorr Memorial Performance Prize in Voice international competition. Joining Katz is a panel of judges as varied in background and experience. Representing every region of the country, judges include professional, community, and faith-based musicians and educators, selected for their interest and expertise. The American Prize is administered by Hat City Music Theater, Inc., a 501(c)3 non-profit performing arts organization based in Danbury, Connecticut.