9/16/2020 Art Therapy alumna Danielle Mann ’20 has been working on some very impressive projects this summer. Growing up in New Jersey, Mann has spent many years fascinated by the work of the Mural Arts of Philadelphia, which “is the nation’s largest public art program, dedicated to the belief that art ignites change.” This past

Art Therapy alumna Danielle Mann ’20 has been working on some very impressive projects this summer. Growing up in New Jersey, Mann has spent many years fascinated by the work of the Mural Arts of Philadelphia, which “is the nation’s largest public art program, dedicated to the belief that art ignites change.” This past summer, she was able to join a team of artists to create two large scale murals, and the experience has been transformative.

Greatly inspired by the program’s work, she had been waiting for the right opportunity to participate in their summer internship program. As her undergraduate degree was in art therapy, she had always looked for internship opportunities that held a psychological aspect, as they would better support her degree. However, she saw an opportunity to participate in their program post-graduation. In February of this year, she applied. Mann says, “I was ecstatic to receive a call from the program in July, asking me if I would work for the Mural Arts of Philadelphia in their now six-week internship program. From my understanding it is a fairly competitive program—as people from all over the Unites States apply every year—and they typically choose around 14 interns each summer!” 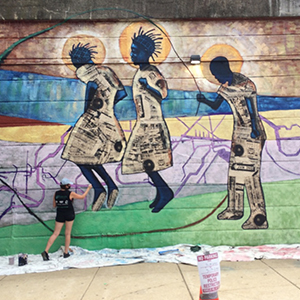 The program was shortened due to the pandemic, but Mann still gained a great deal of experience, knowledge, and satisfaction from the experience. She worked on two murals over the course of the summer program, with two separate teams. She explains, “The first project was a six-wall mural. She says, “I worked with a team of about 12 people and the head artists were Patrick Dougher and Josh Sarantitus.” This first mural was created at the Temple University train stop on Norris Street in Pa.

“The second mural was installed by three people—me, a second intern, and the lead artist Paul Santoleri. This piece was created on the side of a brewery in a small garden called Pocket Park in Roxborough, Pa. All three of the lead artists who I worked with this summer are world renowned and I was able to learn so much valuable information from them.”

These were not the first murals Mann had worked on, but they are certainly the largest to date. She says, “I have worked on much smaller murals in the past, on paper for theatrical productions, but never on a scale like this. Both murals required motorized lifts, harnesses, and various scaffolds in order to reach the tops.”

Mann shares more about her summer internship experience below.

What have you found to be the most enjoyable part of this project?

I think the aspect I have found most enjoyable about the process is the reaction of the community where these murals now live. Every day, people who live in the area would walk by and express their gratitude or admiration for the work we were doing. On multiple occasions, community members would bring us cold bottles of water, Gatorade, or even fresh produce and cold snacks. It may be hard work, but the positive response from the locals of the area made it so worthwhile and fulfilling. When we were tired, their words constantly reminded us why we were creating the mural, and often showed us the transformative power of art. 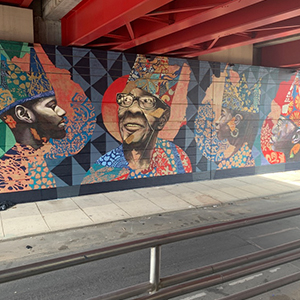 What have you found to be the most challenging part of this project?

The most challenging aspect of this project was probably how physically demanding mural installation is. Working eight-hour days, in 95-degree heat can be quite difficult physically. In addition, due to the pandemic, we were all required to wear masks and gloves, which can become uncomfortable. Even lifting large gallons of paint or gel can be challenging, but I certainly got a good workout while on site!

How did your experience at Endicott help to prepare you for this opportunity?

The internship courses that I took at Endicott definitely helped me in the application process as I had a very impressive resume, as well as a detailed cover letter ready to go. I felt confident in my interview, as well as later making connections with my teammates, contacts at Mural Arts, and the lead artists I was assisting. I hope to work more with these artists this upcoming year, as I was forced to defer from Pratt Institute for one year due to the impact COVID-19 has had on me, and on New York City! In addition, I also felt that the fine arts course such as painting and color theory, was extremely helpful in the day to day. I felt very proficient when it came to the tasks I was given, such as color mixing, color matching, and rendering the design the artists had intended.

How do you prepare for the size and scope of a mural?

Preparation for the two projects I worked on this summer were drastically different, so I was able to learn quite a bit about different kinds of murals. However, both began with priming of the walls with a tinted primer, and large rollers. The first mural (Dougher & Sarantitus) was painted directly on the wall. This meant that at night the team would use a generator and digital projector to cast the reference image onto the wall so we could trace it out to create a map of what would go where when we were ready to paint. When it came time to apply paint, we started with an underpainting often of a complimentary color to the one that would be applied on top. Next we would begin the overpainting and frequently refer to the reference images and original design in order to properly execute the vision of the lead artists.

The second mural (Santoleri) was painted on cloth called parachute cloth, in Santoleri’s private studio. In this case, large sections of the mural are printed lightly onto the cloth, so that each section can be painted on top of a guide, and later meet up with the other panels in a way that will make a coherent image when assembled. After the panels were painted in the studio, we brought them to the site for installation. Using a heavy gel, we glued the panels to the wall one by one, using the lifts as needed. When using the gel, you must apply a thick layer to both the wall, and the back of the panel, then use a tool to press the panel to the wall—squeezing out all the extra gel. Lastly, we would go in with paint to make sure the panels blended seamlessly into one another, and to fill in any gaps that may exist between the panels.

In just six weeks, Mann has gained a wealth of experience and has made a mark on her community—in a beautiful and positive way. Learn more about Mann’s work, follow her on Instagram, and read more student success stories like this!